The Neo-Figuratist Portraiture of Emilio Villalba 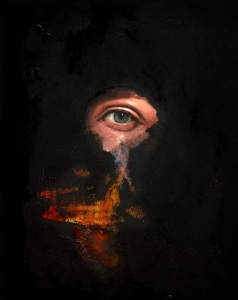 The 1990s saw a revival of neo-expressive and neo-figurative painting, wherein the gestural properties of the medium itself again came to the fore. Its exponents worked in tune with tradition and with their attention focused on the expressive potentiality inherent in the medium of painting. That is to say, basic painterly questions were, once again, on the agenda, strongly emphasizing relations between the picture plane and the picture space, figuration and abstraction and form and colour.

California-based artist Emilio Villalba aligns himself within this revival as a proponent of figurative gestural abstraction. Villalba creates portraits in oil paint that explore the human condition, utilizing expressionistic forms juxtaposed by hyperreal figurative subject matter, to create evocative and arresting imagery. It is often said that contemporary painting has entered a ‘post-conceptual’ phase, in that, that there are intentional references to numerous stylistic features and ideas about art; Villalba’s work is symptomatic of this contemporary tendency.

Inspired by the precision of masterworks from the past, at first glance, much of his work resembles Renaissance portraiture. It’s only when you look closer that you see how he’s re-appropriated the conventional format of the genre: his human faces are distorted and fractured, their facial features obscured or magnified. And unlike the classic portrait painters of the past, Villalba’s subjects aren’t popes or aristocrats, but rather “anyone who comes over to my apartment who is willing to pose.” 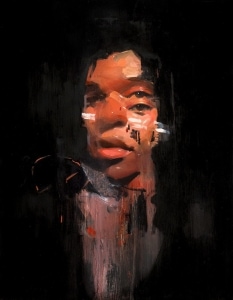 Villalba, boasting 139,000 Instagram followers, has become a social media sensation and the story of how he got there, is remarkable in and of itself. An Academy of Art University M.F.A. painting alumnus, Villalba had no background in the field when he arrived for his first day of classes. After earning a bachelor’s degree in animation from the Art Institute of California, the artist, then based in Los Angeles, worked on projects for companies such as Nike, Visa, and Pepsi. For the third Pirates of the Caribbean movie, he animated Jack Sparrow’s dreadlocks.

At home, as a way to unwind, he began painting experimental abstract watercolors, eventually enrolling in the M.F.A. painting program at the Academy. Although he started out as an abstract major, Villalba later aligned himself with the neo-figurative movement under the guidance of his program director; finding himself and his distinctive style in the process. 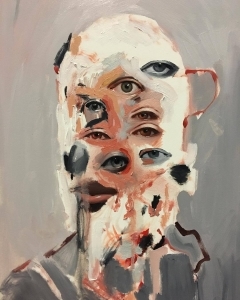 Villalba’s paintings are punctuated by distorted features. Often frenetically situated hyperrealistic eyes, or lips scatter across his canvas’ which are each rendered in pastel palettes. In an artist statement, Villalba explains the ethos of his artistic expression. “In the most basic sense, I paint portraits. Contemporary representations inspired by masterworks of the past. With these pieces, I wanted to explore a kind of omnipresent pressure I think we all live under. One that grows out of the clash between humanity —our unique mess of emotions, obsessions and urges—and society’s prescription for success.”

“I’ve always been fascinated by the mess. The new visuals are a nod to the modern art aesthetic. Subtle shifts, repetition, (re)placement, or absence of facial features are attempts to create a feeling of dissonance and pressure in the viewer. I want someone to be drawn in by the uncanny nature of a piece and still feel safe to explore the feelings and reactions the pressure gives rise to.”